Trending
You are at:Home»Travel Trade News»Ciarán Mulligan named Business Man of the Year at awards

Ciarán Mulligan has been named Businessman of the Year at this year’s Chambers Ireland and InBusiness awards ceremony in Dublin. 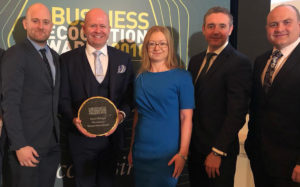 “I was delighted to hear about it,” a chuffed Ciarán told Travel Extra following the event in Dublin’s Westin Hotel.

The awards feature a number of categories – including Businesswoman of The Year, with Fingal County Council winning best council for its efforts, including in tourism development in the area.

Ciarán said he was happy to see law firm Eversheds take home the prize of Business of the Year, as it was involved in the Blue Insurance sale earlier this year.

He said of his company’s latest win: “It’s a team effort – it’s not just one individual that makes a company.”

Ciarán added that the team will be celebrating this week with the coveted granite-plated trophy: “We have our Christmas party on Friday night so we’ll do a bit of celebrating at that.”

It’s the latest major award for the company, which has been voted Deloitte Best Managed Company for the past three years. And the travel industry has been recognised among the wider corporate community too this year, with Tour America’s Mary McKenna becoming an EY Entrepreneur of the Year finalist.