Intercounty hurler Peter Duggan has launched a new visitor experience at Craggaunowen – the Living Past Experience, in Kilmurry, Co Clare.

He was joined at the new educational trail at the award-winning prehistoric park by third and fourth class children from Kilmurry National School and Quin National School in Co Clare.

The trail will give schools and visiting groups the opportunity to experience and learn about everyday life during the prehistoric and early Christian periods in Ireland as they see reconstructed and restored dwelling houses, farm sheds and hunting sites. 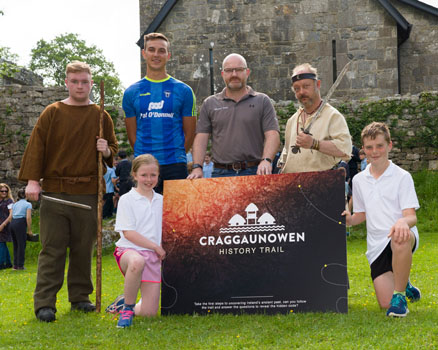 3D models along with a series of markers containing information, images and facts have been placed at various locations of interest along the trail.  Visitors are then guided though the site via a “treasure hunt” style activity book in which they can solve clues along the way.

An interactive trail, specifically for families, was also launched. Like the educational trail, this gives families the opportunity to learn and engage at the locations on the route as they explore the various sites at Craggaunowen.

Designed by Allan Hamilton of Brilliant Trails, the educational trail is the first such feature to be unveiled at a Shannon Heritage site and will potentially be rolled out at other Shannon Heritage attractions in the near future.

Niall O’Callaghan, Managing Director of Shannon Heritage said: “The trail is an interesting and exciting way for children to learn about the prehistoric and early Christian periods in Ireland. With the summer months now here, we are certain that the educational trail will prove to be a very popular attraction with visiting groups.

Craggaunowen – the Living Past Experience is an ancient Celtic settlement that features a restored Ringfort, Crannog, a 16th century castle featuring the Hunt Collection plus a team of enthusiastic animators who re-enact various activities from days gone by. The attraction is also home to a sounder of rare native wild Irish boar and the boat in which Tim Severin sailed across the Atlantic following Brendan’s Voyage. www.shannonheritage.com