Trending
You are at:Home»Aviation»Cork Airport aims to do what Shannon couldn't – and secure German route by public vote

Cork Airport has been shortlisted for a European-wide public vote to be named as a new route for German airline Eurowings, to be part of its 2018/2019 winter schedule.

Eurowings, a subsidiary of Lufthansa, has now opened the first round of its ‘Vote & Fly’ competition, which will run for one week until 12 March 2018. The public can cast their vote at www.vote-and-fly.com.

Cork Airport is the only Irish airport in the competition, competing against Aarhus (Denmark), Stavanger (Norway), Košice (Slovakia), Ljubljana (Slovenia), and Friedrichshafen (Germany) in the public vote. The top three finalists will go forward for a live vote on March 13. 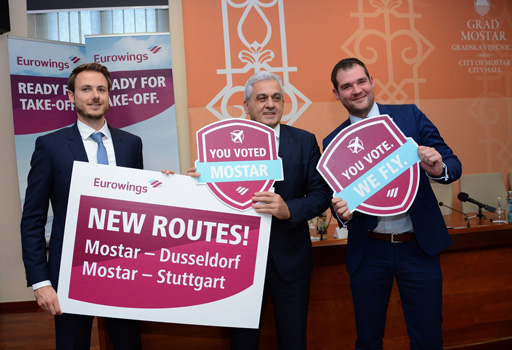 Last October, Shannon Airport was in the final 10 to secure routes from Eurowings for summer 2018. The shortlist featured Biarritz, Brac, Bergen, Belfast, Trieste, Castellón, Mostar, Podgorica and Trapani. But Shannon was pipped at the post, in a tight competition by Mostar.
See also  Etihad named best airline staff service in the Middle East

Speaking on the latest competition, Cork Airport Managing Director Niall MacCarthy said: “We are delighted to be included in the shortlist of European airports, and the win would be a major boost to the region as well as the whole of Ireland.

“I’m urging everyone to take the time to vote for Cork Airport over the next week, and get us into the final three. We need the public’s support to land this wonderful opportunity to secure a new route for the south of Ireland.”