UCC surfers and Aer Lingus staff helped Cork Airport showcase its latest route – to Newquay in Cornwall. The twice-weekly service (Saturdays and Wednesdays) starts on May 6 and runs until September 2. 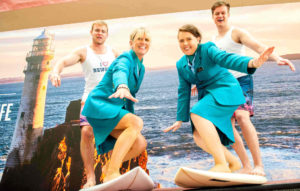 Michael Dooley and David Leahy of UCC Surf Club along with Claire Maguire and Linda Smith of Aer Lingus at the launch of the Cork-Newquay service. Photo: Brian Lougheed

Airport Managing Director Niall MacCarthy said: “This is a very exciting route for Cork Airport and the passengers of Munster. It is testament to our pledge and commitment to bring new routes to the South of Ireland and we are delighted to welcome Aer Lingus Regional’s new route. Newquay is a top destination for surfers around the world, so the route will certainly satisfy the thrill-seekers and adventurers of Munster.

“The launch of the route leads the way for a very exciting Summer 2017 for Cork Airport. In tandem with our inaugural transatlantic routes and new and expanded European destinations, passenger growth is expected to continue to rise to over 2.3 million passengers this year.”

All regions grew during April, with passengers traveling to Continental Europe up 8pc and passengers travelling to Britain up 5pc. Of the British growth, flights to London accounted for 41pc of traffic in the month.