Trending
You are at:Home»Travelextras»Dalata relaunches Maldron in Galway in latest stage of multi-million plan

Dalata Hotel Group, Ireland’s largest, has unveiled the latest stage of its refurbishment and building programme, with the relaunch of the Maldron Hotel Sandy Road, Galway.

The refurbishment extends its 104-bedroom capacity by 61 bedrooms with enhanced guest amenities such as Grain & Grill Bar and Restaurant, Red Bean Coffee Roastery and a business centre which has six newly renovated meeting rooms.

The hotel was officially relaunched by the Lord Mayor of Galway, Niall McNelis, and John Hennessy, Chairman of Dalata Hotel Group PLC, with guests including Galway hurlers Joe Canning and Conor Whelan. 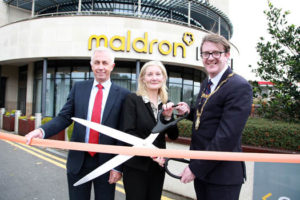 The Maldron Hotel Sandy Road relaunch is the latest in a series of upgrades and improvements to the Maldron Hotel network throughout Ireland which includes extensions of two existing hotels while also opening a new hotel in Cork.

Pat McCann, CEO of Dalata Hotel Group said, “With the vibrancy of Galway City and increased interest in Galway city as a destination, we want to ensure that tourists can enjoy an affordable four star hotel with exceptional amenities. We are especially proud that this latest refurbishment resulted in the creation of 20 jobs.”

The hotel will be auctioning off a Canning hurl signed by Galway hurlers, Joe Canning and Conor Whelan. All funds raised from the auction will go to CMRF Crumlin, Dalata Hotel Group’s chosen charity partner for a third year running.