London is to host its biggest ever St Patrick’s Day Festival, with TV comedian Dara Ó Briain taking the role of parade Grand Marshal. The parade, on Sunday, March 9, will begin at Green Park in the heart of the city, passing landmarks from Piccadilly to Whitehall. Macnas will be one of the main attractions of the parade, which will also feature appearances by singer Jack L, comedian Jarlath Regan and The Late Late Show band.

Other attractions during the three-day event include cinemas around the West End staging the latest Irish short films, comedy, drama and family workshops, plus an Irish Cultural Trail in Camden Market. In Hoxton, 40FT Brewery will host independent brewers and distillers from Ireland, while well-known Irish names will be reciting their favourite poetry on the Tube, Irish musicians will be busking on the Underground and folk band Kila will be performing at Camden Market. 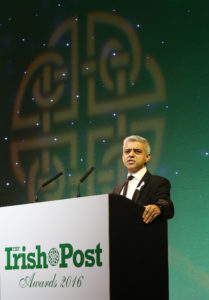 The Mayor of London, Sadiq Khan, said: “The Irish community in the capital has helped to enrich London over many generations, making our capital a livelier, warmer, more vibrant place to live, work and visit. I’m incredibly proud to host the biggest St Patrick’s Festival. London has ever seen, an opportunity for Londoners from all backgrounds and visitors to the capital to immerse themselves in the festivities and experience Irish culture at its best. For me, that’s what occasions like this are all about – people from all communities embracing and celebrating each, showing that London is truly open. Open to people, open for business and open to new ideas.”

Gary Dunne, Creative Programmer of London’s St Patrick’s Cultural Festival, said: “This is a jam-packed programme. It presents an experience which is a diverse, energetic and creative as this great city’s Irish community. Through music, song, dance and community, we’ll bring that very special experience of Irish culture and craic to the heart of London.”

Christine Sisk, Director at Culture Ireland, said: “Culture Ireland’s support for a wide range of artists to travel from Ireland to London’s St Patrick’s Festival offers a unique platform to reach a diverse audience. This year performances by some of Ireland’s finest musicians and the street spectacular by Macnas will connect participants in London to Ireland on this wonderful day of global celebration of the strength of Irish creativity.”