Trending
You are at:Home»Travelextras»Despite the odds of being once known as Ireland’s alcohol-free hotel, Cork’s Metropole manages to hit its 120th birthday

A hotel that proudly boasted of not having a drinks licence for 59 years is celebrating its 120-year history this year – and looking for help with the celebrations.

The Metropole Hotel Cork, which opened in 1897, was first owned by well-known cash and carry group Musgraves. The family were pioneers and the hotel did not apply for a licquor license until 1956. The family were proud that the hotel was the first unlicensed hotel in Ireland. Douglas Vance, who managed the hotel from 1944 until 1982, persuaded the Musgraves that a license to serve alcohol was necessary for a modern hotel. 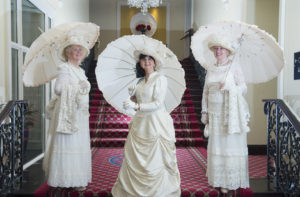 Mona Kennedy, Teresa Delius and Irene O’Driscoll from Cobh animation team as The Metropole will mark its 120th year in business In June. Photo: Gerard McCarthy

England’s King Edward VII is reputed to have had tea on the roof of The Metropole when he visited Cork in 1903 for the city’s Great Exhibition. Down the years many more famous personalities have been guests of the Metropole, and included Gregory Peck, James Mason, Frank O’Connor, John Steinbeck, Vittoria de Sica, John Huston and Walt Disney. However it was Dawn Adams, the 1950’s British film star, who created the greatest stir when she stayed at The Metropole. When she was attending the Cork Film Festival she requested a bath of milk. Douglas Vance, the famous hotelier of the Metropole refused such a request as the people of Cork were finding it hard to makes ends meet, with the story making headlines around the world at that time.

The Metropole was hit hard after the downturn in visitor numbers when the troubles began in 1969. The Metropole, and in particular Jim Mountjoy, the deputy general manager, came up with the idea of starting a Cork Jazz Festival in 1978. This festival has grown into a world renowned occasion held every year on the October Bank Holiday Weekend.

In 2015 the Metropole Hotel was purchased by new owners who also own the Cork International Hotel and the Cork Airport Hotel. They have since purchased an adjoining site with plans for upgrade and extension of the hotel.

The Metropole will mark its 120th year in business this June. To celebrate, the Metropole are appealing to the public to share their memories from the last number of decades. The memories can be from events held at the hotel, weddings, Jazz memories or any stories of nostalgia.

The best entry will receive a complimentary family gathering for 30 guests and an over-night stay for two on the night of the function. They will also receive an invitation to celebrate at the exclusive party that will be held in June at the hotel. Entries can be submitted to the hotel Sales Manager, Susan Lavelle by calling (021) 4643700 or emailing slavelle@themetropolehotel.ie.