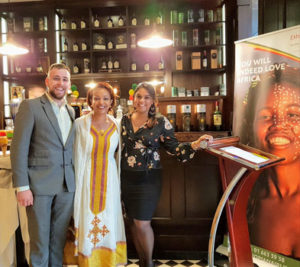 Guests were treated to traditional Ethiopian food, wine from Ethiopia’s Rift Valley and
witness a typical Ethiopian coffee ceremony at the event, held in the Clayton Hotel Dublin Airport.

For Ethiopians around the world the New Year signifies an end to the rainy season, plentiful harvests
and a countryside covered with bright yellow flowers. And, as is customary, Mrs Tekalign reminded guests that as Ethiopia uses the Julian calendar, which is seven years behind our Gregorian calendar, everyone in the room became instantly younger.