Trending
You are at:Home»Aviation»Ethiopian Airlines ushers in a new year and a new Ireland boss at airport hotel event

Ethiopian Airlines celebrated two major occasions as it hosted trade and media at the Clayton Hotel, Dublin Airport. September 11 marked the country’s new year and also the passing of the baton from Ireland head Michael Yohannes to Meseret Tekalign.

The team from the airline here in Dublin and the Ethiopian Embassy in Dublin celebrated the secular and religious celebration Enkutatash, meaning “gift of jewels”. It’s said to date back to the time of the Queen of Sheba when she gifted Solomon with spices and jewels. 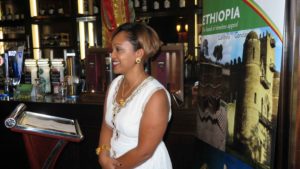 New Area Manager Ireland Meseret Tekalign said Michael “had raised the bar for the airline”, overseeing the launch of the services linking the Ethiopian capital, Addis Abbaba, Dublin Airport and Los Angleles. DAA boss Kevin Toland said at the LA launch in June 2015 that “it was a unique event in aviation history as the flight joined the three continents of Africa, Europe and North America”.

Ireland’s Honorary Consul in Los Angeles, the Corkonian Finbar Hill, a regular flier with Ethiopian, addressed the new year event, as did the airline’s Ireland Sales Manager, Tony Flynn, and Dominic Burke, Managing Director of Travel Centres. Dominic, noting that Ethopia uses the Coptic calendar, which is seven years behind ours, added: “I believe that when I get home I’ll be seven years younger, so hopefully my wife will still recognise me.” He said that the airline “has been a great supporter of the trade, and the airline is unique and has much to offer”.

See the full album of photos from the evening here.