Housing Minister SImon Coveney switches on the green lights at Niagara Falls in Canada to kick off the St Patrick’s celebrations in the country.

Coveney – tipped to be one of the front-runners to succeed Enda Kenny as Taoiseach – is in Canada as part of the “Promote Ireland” programme around St Patrick’s Day helping to grow tourism to Ireland. The famous falls are just one of over 200 famous landmarks and iconic sites which will go green this week, as part of Tourism Ireland’s annual Global Greening initiative. 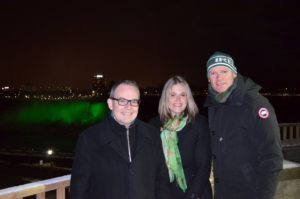