Trending
You are at:Home»Aviation»Hike in passengers as almost 33 MILLION pass through Irish airports

The number of passengers passing through Irish airports rose by over 10pc last year compared with 2015, according to latest CSO figures.

In 2016, almost 33m passengers (32.8m) passed through Irish airports, and passenger numbers increased in all airports with the exception of Waterford. Dublin Airport accounted for 84.6pc of all air passengers in 2016. 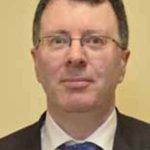 Ireland’s main airports handled a total of 146,829 tonnes of freight in 2016, the vast majority (94pc) of which was international freight.