Trending
You are at:Home»Aviation»Hub figures rise 45pc as 1.9m passengers use Dublin in January

The importance of hub traffic (up 45pc) was revealed as Dublin Airport’s January passenger numbers increased by 9pc to almost 1.9m.

Almost 55,000 passengers used Dublin Airport as a hub to connect to another destinations during January.

Passenger volumes to and from continental Europe grew by 7pc, with almost 873,000 passengers travelling to European destinations.

British traffic grew by 8pc with more than 741,000 passengers travelling on routes between Dublin and Britain during the month.

Passenger volumes to and from North America grew by 28pc with more than 165,000 passengers taking transatlantic flights to and from Dublin in January. 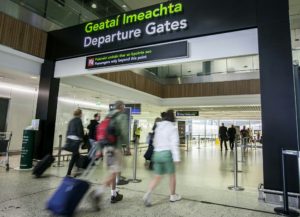 Ahead of the arrival of Qatar to Dublin, other international traffic, principally to the Middle East, increased by 2pc, with more than 72,000 passengers travelling these routes in January.