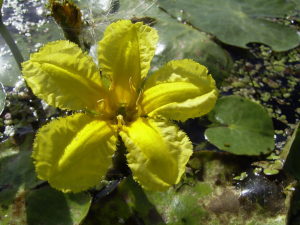 It thrives in shallow and nutrient-rich water, and has been recorded as an invasive species in the U.S., Canada, Sweden, Northern Ireland, and New Zealand (where it was successfully curbed).

The plant is deliberately imported and cultivated as an ornamental plant, and has spread because of this to sites across Ireland. The plants float on the surface and obstruct light to plants under the water, stopping them from growing.  As well as being a non-native species that can disrupt habitats, it can affect businesses. Angling for carp has been obstructed in places like Maynooth and Balllyhonock.

The plant can reproduce from cut pieces as well as seeds, which makes its control more difficult. Boating activities may disrupt the plants and carry plant pieces to new areas. Attempting to get rid of the plant without being cautious about cutting it can instead lead to its spread. The best solution perhaps is not to plant it in the first place.

Excerpts from ‘Risk Assessment of Nymphoides Peltata’ from Inland Fisheries Ireland and the National Biodiversity Data Centre (download here): “Nymphoides peltata can out-compete and extirpate native plant species. Individual fragments of the plant are capable of colonising an entire water body within a few years… There are no known natural predators, parasites or pathogens of this species in Ireland that will have an effect on its establishment.” “To date,such anthropogenic-mediated transfer has been the principal pathway to facilitate the spread of Nymphoides peltata to uncolonised waters in Ireland… “