Irish Ferries finally managed to breathe a sigh of relief as its new WB Yeats ship finally arrived in Dublin Port. The ship had been due to enter service in July, but this was postponed to September initially, before a further delay. Irish Ferries said during the summer that it had “no option but to cancel all the planned sailings to France for WB Yeats this summer, with the ship now likely to commence sailing with Irish Ferries on Dublin / Holyhead as scheduled in September”. 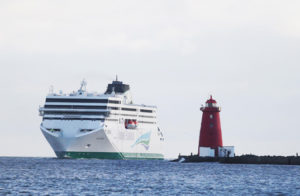 The newly-arrived ship, built for service between Ireland, France and Britain, is a 51,388-tonne vessel  measures 195 metres in length.

It will offer up to four sailings a week directly from Dublin to France. Sailing from mid-March to the end of September, Irish Ferries said it will be “the only operator providing customers with a direct crossing from the convenient Dublin Port to the perennially popular holiday destination”.

It has capacity for 1,800 passengers, with 440 cabins, including luxury suites with private balcony sea views and a dedicated butler service.  The ship is styled in natural tones, with rich furnishings accented by marble and steel, with state-of-the-art lighting creating a relaxed and contemporary atmosphere on every deck. Décor in the passenger areas is said to be elegant, illustrated by famous works of art and literature from Yeats and other well-known artists, while downloadable audio extracts from the famous poet’s celebrated catalogue provide the backdrop to a walking tour.

It also features Lady Gregory Restaurant, the more casual Maud Gonne Bar & Lounge and The Abbey and The Peacock cinemas.

Holidaymakers will enjoy 10pc off when they book a summer sailing from Dublin to France on www.irishferries.com before January 15, 2019.