Trending
You are at:Home»Aviation»KLM to increase frequency again on Dublin-Amsterdam route to five times a day

Six months on from launching its Dublin to Amsterdam route, KLM is to again increase frequency between the capital’s airport and Schiphol.

KLM, which launched the double-daily route last November using 100 passenger-capacity Embraer 190s, increased the frequency to four times a day on March 26. It’s now to fly five times a day between the cities, on Monday, Wednesday and Friday initially, between July 10 and September 1, and five times daily thereafter until October 28.

“We are thrilled to be back on the Dublin-Amsterdam route, with great connections worldwide,” Siobhan Scanlon, Air France-KLM, said at the time of last year’s initial launch. 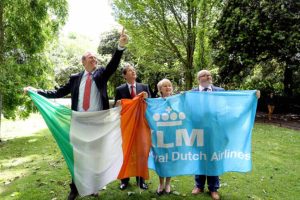 Welcoming the latest increase in KLM’s frequency to Amsterdam, Dublin Airport Managing Director Vincent Harrison said: “I am delighted to see KLM increasing frequency on two separate occasions on its Amsterdam route since it entered the Irish market last November.  This further increase in frequency is testament to the popularity of this route for both business and leisure passengers and we wish KLM continued success with its Dublin-Amsterdam service.”

Warner Rootliep, General Manager of Air France-KLM for Britain and Ireland, said that demand for “convenient schedules and seamless connections to our long-haul network is important to our Irish customers, so we are pleased that we can add yet another frequency to this route only months after increasing flights from two to four a day in March.”

The additional frequency will be serviced by an Avroliner AR8 aircraft, with capacity for 95 passenger, with a convenient schedule offering Irish passengers seamless connections via Schiphol to a network of over 150 worldwide destinations including Johannesburg, Havana and Hong Kong.