Taoiseach Leo Varadkar has supported the promotional efforts of Tourism Ireland on his visit to Canada, meeting Canadian tour operators and airlines.

Canada is one of Ireland’s top ten tourism markets and 2016 was the best year ever for Irish tourism from Canada, welcoming 203,000 Canadian visitors, up 11pc on 2015. In fact, visitor numbers from Canada have grown by almost 28pc since 2014, on the back of a significant increase in direct flights from Canada to Ireland. 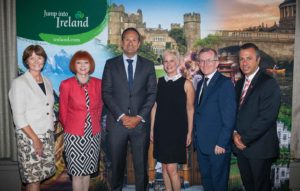 Niall Gibbons, CEO of Tourism Ireland, said: “In 2016, we welcomed a record 203,000 Canadian visitors to the island of Ireland. Tourism Ireland is confident of continued strong growth for 2017 and in the years to come. A number of factors are working in our favour, including more airline seats than ever before between Canada and Ireland – with about 8,000 seats on 33 flights now available each week during the summer months, an increase of 26pc over summer 2016.

“We are rolling out an extensive programme of activity in Canada throughout 2017 – which includes co-operative promotions with key airline and tour operator partners, email marketing and social media promotions, as well as online advertising on popular websites. And, our publicity programme in Canada this year will generate positive coverage for the island of Ireland worth more than €7.5m.”