Trending
You are at:Home»Aviation»Cityjet chosen as aviation partners for London GAA

CityJet has become the official airline of London GAA and has announced its second season of sponsorship of London GAA’s senior football and hurling championships this year.

It’s a handy tie-in for CityJet, which has its major hub at London City Airport, and flies up to seven times daily each way on the Dublin/London City route. Britain also has more than 12,500 active GAA players.

Other airlines have had strong sponsorship deals with the GAA, most notably Etihad, which was the headline partner of the hurling championship.

Cathal O’Connell, CityJet’s Chief Commercial Officer, said: “London GAA is at the heartbeat of the Irish community in the capital and as an organisation it plays a pivotal role in the lives and welfare of thousands of Irish people. Player numbers are increasing all the time and the GAA now has an active programme in third level colleges.” 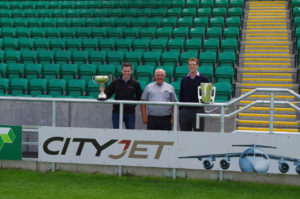 “As an airline that serves the Irish community in London, we are delighted to renew our sponsorship of the London GAA senior championships. The GAA works successfully in bonding Irish people together when abroad but also in integrating them with their neighbours and the wider community,” he added.