Trending
You are at:Home»Aviation»New Dublin-Doha route won’t be affected as Emirates and Etihad halting routes to Qatar in diplomatic row

The launch of the Qatar Airways route between Dublin Airport and Doha will be unaffected despite an escalating rift between Qatar and a number of neighbouring countries in the Gulf region.

A number of countries, including Saudi Arabia and Egypt, have cut diplomatic ties with Qatar, accusing it of destabilising the region and backing militant groups. Qatar has denied the claims made by the countries.

Saudi Arabia closed its borders, severing land, sea and air contact with the tiny peninsula of the oil-rich nation. Qatar called the decision “unjustified” and with “no basis in fact”.

The service between Ireland and Qatar commences on June 12, with a gate ceremony to be held at Dublin Airport.

Abu Dhabi’s Etihad Airways and Dubai’s Emirates are suspending all flights to and from Doha, starting from Tuesday morning. Both carriers operate four daily return flights to the Qatari capital of Doha.

Budget carriers FlyDubai and Air Arabia are also cancelling routes to Doha, with other airlines, including Bahrain’s Gulf Air and Egyptair, expected to follow.

Saudi Arabia, the UAE, Bahrain and Egypt all said they would stop flights in and out of Qatar, and close their airspace to Qatar Airways, which has dozens of flights each day to Dubai, Abu Dhabi, Riyadh and Cairo. The airline’s routes to other countries will be unaffected, but flight paths have been changed to fly over Iran and Turkey to European destinations.

Qatar Airways said: “All customers booked on affected flights to and from the Kingdom of Saudi Arabia will be provided with alternative options, including the option of a full refund on any unused tickets and free rebooking to the nearest alternative Qatar Airways network destination.” It also provided a link to its travel alert page.

A number of European airlines also fly to Doha,  with British Airlines saying that it will “continue to offer a full schedule”. 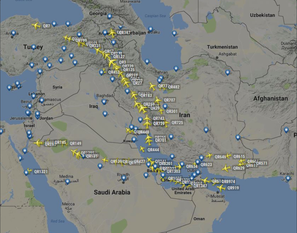 “All customers who are booked on Etihad Airways flights to and from Doha are being provided with alternative options, including full refunds on unused tickets and free rebooking to the nearest alternate Etihad Airways destinations.” Flights on June remained unaffected.

In response, Qatar Airways has suspended all flights to Saudi Arabia from 2359 this evening (June 5).

Saudi Arabia, the UAE and Bahrain have given all Qatari visitors and residents two weeks to leave their territory. The UAE and Egypt have given Qatari diplomats 48 hours to leave both countries.