Trending
You are at:Home»Travelextras»NYC sees rise in food halls with more on the way

New York City is experiencing a trend in the rise of food halls, celebrating cuisines from around the world. Recent openings include:

Berg’n: Since opening in 2015, the Brooklyn-based food hall in Crown Heights has quickly emerged as a local hotspot for its trendy food offerings. Visitors and locals can sample tasty burritos at El Meat Hook, Filipino-inspired cuisine at Lumpia Shack and pulled pork and brisket at Mighty Quinn’s Barbeque. Led by the founders of Brooklyn Flea and Smorgasburg, Berg’n is open for breakfast, lunch and dinner. Visit bergn.comfor more information.

Gotham Market at The Ashland: Gotham West Market, the day and night dining destination in Hell’s Kitchen, will be opening a new location this fall inside The Ashland in Brooklyn’s Fort Greene. The 16,000-square-foot space will have a pop-up place for local chefs and restaurateurs, in addition to full-time food vendors like Apizza Regionale (Italian fare), Flip Bird (rotisserie chicken), Mu Ramen (bowls of noodles, burgers and Japanese snacks) and popular Midtown barbeque restaurant Mason Jar. Visit gothamwestmarket.com for more information. 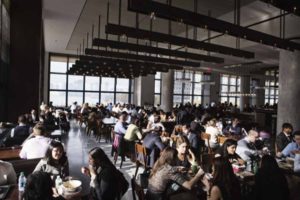 Queens Night Market: The large, family-friendly open-air night market in Queens features independent vendors selling merchandise, art and food that celebrate the rich cultural diversity of the borough. The market is located outside the New York Hall of Science in Flushing Meadows Corona Park, and currently runs every Saturday through August 20th. The market is open from 6:00 pm through Midnight. For a complete list of upcoming vendors visitqueensnightmarket.com.

TurnStyle: Manhattan’s new underground food hall and retail space located in the Columbus Circle subway station holds over 30 small restaurants and shops, including Blossom du Jour, Bolivian Llama Party, Doughnuttery, Dylan’s Candy Bar, The Pizza and Yong Kang Street. A MetroCard is not required to gain access to the market. Visitors can enter at Columbus Circle or 57th Street and Eighth Avenue. Visit turn-style.com for the complete list of shops and restaurants.

Bourdain Market: American chef and television personality Anthony Bourdain will be opening a 155,000-square-foot international food market on Manhattan’s Pier 57 in 2017, which would make it the largest food hall in New York City. Complete details have not been announced, although the space will reportedly feature over 100 vendors from around the globe. For more information visit bourdainmarket.com.

The Shops & Restaurants at Hudson Yards: When open in 2018, the Restaurant Collection at Hudson Yards will feature 12 luxury restaurants, including a steakhouse and American grill by chef Thomas Keller. The final 10 restaurants have not been confirmed, although Spanish chef José Andrés and Greek seafood chef Costas Spiliadis will reportedly be adding outposts to the collection. For updates visit hudsonyardsnewyork.com.

For more information on things to do in New York City visit http://www.nycgo.com