Trending
You are at:Home»Aviation»Passenger numbers up 4pc last month at Dublin Airport, but rate of growth slows

Almost 1.8m passengers passed through Dublin Airport in February, a 4pc increase over the same month last year. But the rate has growth has slowed down – as February 2016’s 1.7m figure was 17pc up on 2015. 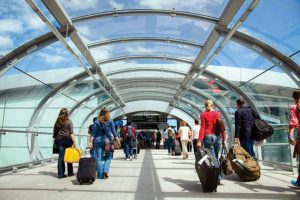 Passenger volumes to and from North America grew by 28pc last month, with almost 127,000 passengers travelling on this sector. That’s a jump even on the corresponding figure (20pc) for February 2016, when 98,000 travelled.

The number of passengers using Dublin Airport as a hub to connect to another destination increased by 81pc as more 59,000 passengers connected through the airport last month. Again, it’s a big jump on last year’s rise of 51pc to 33,000.

More than 3.6 million passengers have used Dublin Airport in the first two months of this year, which is a 6pc increase on the same period in 2016.