Trending
You are at:Home»Aviation»ACI Europe says Dublin airport now 17th in Europe after 12.3pc growth to 1.86m in January

Olivier Jankovec, Director General of ACI Europe, said “2017 is off to a rather booming start for air traffic, confirming the momentum which gradually built up in the second half of 2016. The performance of the EU market is especially impressive, with January passenger volumes up by nearly a quarter over the past two years. Coupled with solid gains in freight traffic, this primarily reflects much improved macro-economic conditions – especially in the Eurozone where unemployment is at its lowest in eight years and the economy has recorded 14 consecutive quarters of growth.” 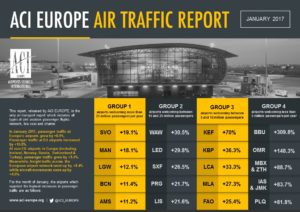 In line with last year, secondary hubs and medium-sized airports tended to lead the growth dynamic in January. However, both the top 5 European hubs (‘the Majors’) and smaller regional airports registered improving performances – resulting in an overall more balanced dynamic for passenger traffic across the industry.

The Majors saw passenger traffic increasing just over 2pc in January (compared to an average of 1.5pc in 2016), on the back of better results at Paris-CDG (6.1pc) and Frankfurt (1.8pc) – as well as further gains at capacity constrained London-Heathrow (4.2pc). Amsterdam-Schiphol kept leading the league (11.2pc), which overall results were dragged down by a sharp drop at Istanbul-Atatürk (-12.5pc).

Passenger traffic at smaller regional airports  grew by nearly 10% – almost closing the gap with larger ones.