Trending
You are at:Home»Aviation»Qatar Airways back in the ring again with latest Irish horse industry sponsorship

Qatar Airways is to launch its latest tie-in with the Irish equestrian and horse racing sectors, announcing a partnership with The Curragh following the inaugural Dublin-Doha flight on June 12. Qatar Airways was also recently announced official airline partner of the 2017 Dublin Horse Show.

Former champion jockey Johnny Murtagh, who rode to success in the Qatari capital Doha, and is now a leading trainer based at The Curragh, helped to launch the sponsorship announcement with his horse Windsor Beach. 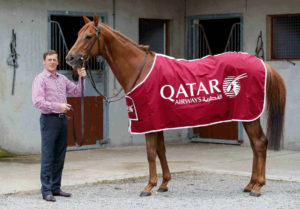 The airline said the partnership was made possible by the generosity of Qatarai businessman Mubarak Al Naemi, owner of Kilfrush Stud in Co Limerick. The airline said the move “celebrates the Irish and Qatari affinity with horses, and brings together the cultural heritage of the two nations”.

Jonathan Harding, Senior Vice President of Qatar Airways Europe, said: “Qatar Airways is honoured to partner with The Curragh. As such an established and world renowned horse racing venue, there is great opportunity to connect the Irish and Qatari communities.”

Evan Arkwright, Commercial Manager of The Curragh, said: “The Curragh is delighted to have the opportunity to work with one of the world’s leading airlines at a very important time for the racecourse to develop key partnerships with premium global brands. I would like to thank Mr Al Naemi for helping to facilitate this initiative which will further strengthen and enhance the important links we have with the Gulf region.”