Trending
You are at:Home»Aviation»Qatar jumps into RDS horse show sponsorship ahead of June flights launch

Qatar Airways has signed a high profile Irish sports partnership as it counts down to the launch of its Dublin-Doha route on June 12. The Middle Eastern airline will be the Official Airline Partner of the 2017 Dublin Horse Show at the RDS. 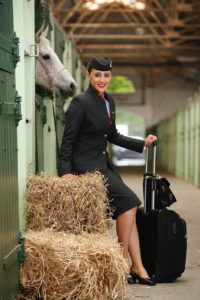 Spice, the Arab horse, and cabin crew member team up to announce Qatar Airways as the Official Airline Partner of the 2017 RDS Dublin Horse Show

The move follows in the footstep of airline rivals, with Etihad Airways sponsoring GAA hurling from 2008 to 2017, while Emirates is a high profile sponsor of the European Tour and Irish Open in golf. Turkish Airlines was recently unveiled as the main partner of the Irish senior men’s cricket team, which is aiming for the top-ranked Test status in the sport. Meanwhile, the Aer Lingus partnership with the Irish rugby team around the Six Nations has been recognised as a key one by the public, according to sports sponsorship agency Onside.

Qatar – which is to operate the Dublin route with Boeing 787 Dreamliner  – said the horse show partnership “celebrates the Irish and Qatari affinity with horses”, and  the Dublin Horse Show is one of the largest international equestrian events in the world and features the finest show horses and national breed horses as well as top national and international show jumping.

Qatar Airways Country Manager for Britain and Ireland, Morena Bronzetti, said: “Qatar Airways is delighted to partner with the 2017 Dublin Horse Show.  In its 144th year, the depth of culture and heritage around horses forms a natural alliance and is something we’re proud to support. Qatar Airways is committed to this new market and we look forward to celebrating the cultures and heritage of the Irish community.

“We are keen to strengthen our connections with Ireland and the Irish people. As a rapidly expanding business and cultural hub, we believe Dublin will be an appealing destination to travellers across the globe. Similarly, we believe the new route will inspire Irish passengers to explore Doha for the first time, and from there, connect to our more than 150 destinations worldwide.”

RDS CEO Michael Duffy said: “The show is staged to showcase the best Irish horses to a national and international audience and this link-up with Qatar Airways has the potential to be beneficial for the Irish sport horse industry for which the Dublin Horse Show is the annual pinnacle event.” The show is taking place at the RDS on August 9-13 this year and welcomes visitors from Ireland and across the world.

The daily flights will operate as below:

Qatar Airways, the national carrier of the State of Qatar, is one of the fastest growing airlines operating one of the youngest fleets in the world. Now in its 20th year of operations, Qatar Airways has a modern fleet of 195 aircraft flying to more than 150 key business and leisure destinations across six continents. The world’s fast growing airline will add a number of exciting new destinations to its growing network in 2017, including Auckland, Chiang Mai, Nice, Skopje and many more, flying passengers on board its modern fleet of 195 aircraft.

Qatar Airways is a member of the oneworld global alliance. The award-winning alliance was named the World’s Best Airline Alliance 2015 by Skytrax for the third year running. Qatar Airways was the first Gulf carrier to join global airline alliance, oneworld, enabling its passengers to benefit from more than 1,000 airports in more than 150 countries, with 14,250 daily departures.

Oryx One, Qatar Airways’ inflight entertainment system offers passengers up to 3,000 entertainment options from the latest blockbuster movies, TV box sets, music, games and much more. Passengers flying on Qatar Airways flights served by its B787, A350, A380, A319 as well as select A320 and A330 aircraft can also stay in touch with their friends and family around the world by using the award-winning airline’s on-board Wi-Fi and GSM service.

Qatar Airways is one of the world’s leaders in sponsoring global sporting events, including the strategic team sponsorships of FC Barcelona and Al-Ahli Saudi Arabia FC. Qatar Airways’ strategy reflects the values of sports as a means of bringing people together, something at the core of the airline’s own brand message – Going Places Together.