Trending
You are at:Home»Aviation»Qatar looks to go double-daily at Dublin and will beat competitors with product – CEO

Qatar Airways’ new Dublin-Doha route has already exceeded expectations – and airline boss Akbar Al Baker is looking to go double daily. “We have five percentage points higher load factors from Dublin than we envisaged – and we have just started one month ago so we see that there is a very big potential,” the CEO said.

He said that despite fierce competition in the Irish market, “our two competitors don’t go to a lot of destinations in the network that we go and there is potential for people to come to Ireland from those destinations. I know that they [Emirates and Etihad] come double daily each of them and we come single, this is why we see that in a short period of time the business plan that was shown to me is far exceeding the business plan, the loads that we have. 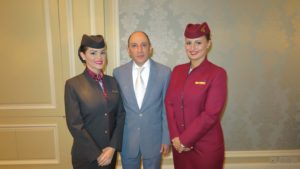 But he said double-daily is a case of “not until we have a constant 85pc load factor for a period of time”.

Mr Al Baker’s view, made at the official launch of the route at Dublin’s Intercontinental Hotel, was supported by DAA Chief Executive Kevin Toland, who said: “Already we can see strong bookings in both directions which is terrific for a route that’s just starting.” Regarding Dublin overall, he said: “We’re up over 6pc in the first five months which is nearly an extra 700,000 passengers.”

And at the event, attended by Tourism Ireland CEO Niall Gibbons, the colourful Qatar boss said the Dublin route would attract curious and wealthy Qataris to this country. “So people who would go to Egypt – I don’t know for what reason – I would rather avoid that, or to other destinations like Dubai or Abu Dhabi have another destination. These are high-spending individuals  They are not individuals who would just like to go and stay in a bed and breakfast place.”

But he said double daily would only happen with its current Boeing 787 Dreamliners plying the route, and not the larger Airbus A350 that was used for the photo-op inaugural flight into Dublin.

“We always like to show off, this is why we brought something that didn’t operate into your airport. We see that the current capacity for Dublin at the moment is the 787. We don’t really want to dump capacity into markets and then undermine ourselves. The A350 has nearly 20pc more capacity. We will initially operate a 787 and, when the market grows, introduce a second 787 and then, as the market grows, convert it into an Airbus A350.”