Trending
You are at:Home»Aviation»OAG confirms Ryanair is fifth biggest airline in world & biggest outside USA

Ryanair has been ranked as the biggest non-American airline in the world – and the fifth-biggest overall on the planet, according to a new survey of 2016-2017. 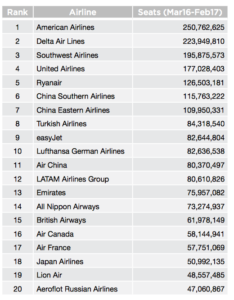 OAG noted that Ryanair operated the highest number of routes (1,319) of any airline in the top 20, and also had the highest load factor, at over 90pc.

Its top three routes were Athens-Thessaloniki (2,397 bookings a day on average); Dublin-Stansted (2,157 bookings a day); and Catania to Rome’s Fiumicino Airport (2,036 bookings).

Michael O’Leary’s airline came second to Japan Airlines in the top 20 for onetime performance in the last 12 months. Ryanair’s low-cost rival, EasyJet, was ranked ninth, with 678 routes and 69,114,266 passengers carried.

The top positions were dominated by US carriers, with American Airlines boasting just over a quarter of a billion seats, followed by rival Delta Air Lines and low-cost carrier Southwest Airlines.