Trending
You are at:Home»Aviation»Ryanair passengers up 6pc to record 11m in November

Ryanair reported 11m passengers in November, a record for the month and up 6pc on November 2018, with rolling annual up 9pc to 151.6m. Load factor was an industry record equalling 96pc. 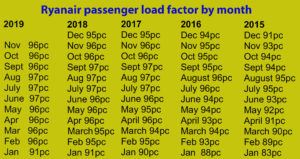 Passenger numbers for November have doubled in the period since 2013. Ryanair’s record monthly figure remains 14.9m in August.

The airline is preparing for lower growth of 1-3pc in 2019 due to delivery delays of the grounded Boeing 737MAX.