Trending
You are at:Home»Travelextras»Ryanair ups the ante as it invests €250m more at Lufthansa airport base

Ryanair is continuing its push into what it believes is an untapped but lucrative market with a new $300m (€250m) investment at Frankfurt Main airport.

The investment comes in the form of three additional aircraft being based at Main, one of Lufthansa‘s two main bases, along with Munich, in Germany. The move will give it a total of 10 planes at the airport, and will beef up its summer 2018 schedule there with 38 routes (up 34), as well as one new route at the smaller Frankfurt Hahn (a total of 43).

The Irish airline sees potential in Europe’s biggest economy, and Chief Marketing Officer Kenny Jacobs said in Dublin recently: “Germany is still the market where you have the lowest penetration of low-cost airlines. It’s the most protected market in Europe. German consumers are also paying the highest fares in Europe. 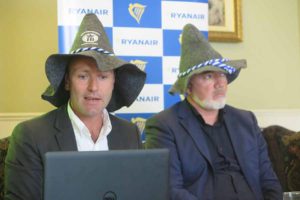 Mr Jacobs also claimed the Air Berlin sale was a “complete stitch-up” and that Germany was becoming the “banana republic of European aviation”.

Frankfurt Hahn will get a new service to Plovdid (2w) as well as more flights to Tenerife (2w). Ryanair will continue to connect Frankfurt Hahn with major business centres including Dublin (4w), Madrid (daily) and London (3 daily).

In Frankfurt, Ryanair’s Chief Commercial Officer David O’Brien said: “We are pleased to announce an additional three based aircraft at Frankfurt Main to bring it to a total of 10 and an investment of $1bn. We have also launched our Frankfurt summer 2018 schedule with a total of 81 (35 new) routes to/from both Frankfurt Main and Frankfurt Hahn, which will deliver over 4.7m customers through the two airports this year. German customers and visitors are booking our winter 2017 seats in record numbers.”