Trending
You are at:Home»Aviation»Shamrock gets even slantier as Aer Lingus reveals mostly-white aircraft in rebrand

In possibly the worst-kept secret in the travel industry – with images leaked online of the new look – Aer Lingus unveiled its refreshed brand with an updated logo and new aircraft livery, featuring more white than green.

In what the airline said reflected its “position as a modern and contemporary Irish brand that competes on the international stage”, the slanty shamrock unveiled in 1996 is now even slantier.

The new logo restyles the iconic shamrock, adding a tilt “to symbolise dynamism and speed, with heart-shaped leaves reflecting the warmth and hospitality of the brand”.  Aircraft will feature four shamrocks: the first is within the new logo, the second sits on the tailfin, a third welcomes passengers at the door, with a final leaf on the wingtip.

The Aer Lingus logo font has changed to ‘diodrum’ and the dominant colour is teal. The body of the aircraft will be white with a teal-coloured tail and engines. The brand refresh is being rolled out today across all brand platforms, with a new website design and new app design. It will be visible from check-in to boarding gate and on to the aircraft.

The refresh is part of a growth plan to increase its North Atlantic fleet from 17 to 30 by 2023.  Overall, it plans to grow its A330 fleet to 16 aircraft (from 13 in 2017) and invest in 14 new A321LRs to provide capacity for growth across the Atlantic and within Europe.

The revamp – by New York brand agency Lippincott – was showcased to around 500 members of the trade, tourism and media at Hangar 6 in Dublin Airport. The lead designer on the project was Dubliner Brendán Murphy who has been working with Lippincott in New York for over 20 years. 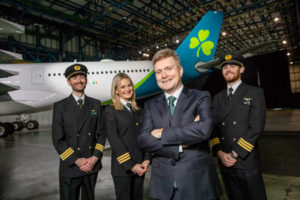 “We have ambitious plans for our future and the years ahead, yet we are aware of challenges facing the modern industry and thus investment in our new brand identity and livery; our new uniforms which will be unveiled later this year; and our fleet expansion are considered investments in the future of Aer Lingus to enable us realise our ambition to be the leading value carrier across the North Atlantic.”

Mike Rutter, Chief Operating Officer, said: “Since 2015, we’ve invested significantly in our business, improving our value proposition and overall guest experience and becoming Ireland’s only four star airline.  Innovations that we have introduced include the roll-out of WiFi on our A330s, automated check-in and bag drop at Dublin Airport, Business Class improvement with fully lie-flat beds and economy catering upgrades. We’ve also enhanced our performance to become the most punctual airline at Dublin Airport.

“We conducted extensive guest research across Ireland, Europe & North America to inform every key stage of the process to ensure that the brand revealed today is reflective of our value carrier positioning.”

The last rebrand – unveiled in 1996 as part of a two-year programme – had an estimated cost of £8m; the latest incarnation is reckoned at around €2m.