Trending
You are at:Home»Aviation»Shannon says passenger number set to rise 30pc since split from the DAA

Shannon Airport has reported a 6.6pc increase in passenger numbers during the first half of the year – and maintained it’s thriving since its split from the DAA at the end of 2012.

The airport said it’s on track by the end of the year to have grown passenger numbers by almost 30pc from its time grouped with Dublin and Cork airports.

It believes this year’s rise so far suggests also that 2018 will be Shannon’s best year as an independent entity outside of 2014 when double digit-growth was achieved. 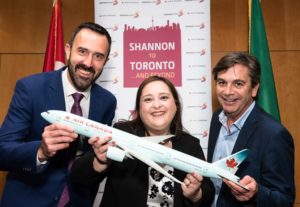 Similar to 2014, the strong performance in the first half of this year is driven by additional and improved services, it said.  These include a new Toronto flight launched early last month with Air Canada and new services to Barcelona-Reus, Bristol and Liverpool with Ryanair, while the airline also increased Manchester frequencies.

Norwegian Air International is to expand its Shannon/New York service later in the year. In all, six airlines operate transatlantic services at Shannon, operating to seven destinations – the airport’s biggest number of services to the US/Canada in 17 years.  Ryanair also recently announced it is to go year-round to Alicante from this winter.

“We’re reaping the dividend from the hard work of last year in securing these new services and it’s great to see the airport as busy as it is. This is our busiest first half of the year in a decade,” said Shannon Airport Managing Director Andrew Murphy.

“The year so far reaffirms the opportunity that there is for growth at Shannon and we see that opportunity opening up even more now with the completion of the motorway right up to Tuam and, in the longer term, we have the M20 being developed to Cork. Our target now is to make sure that the public are aware of these services and use them.”

Shannon Group CEO Matthew Thomas said: “Our recently published Economic Impact Assessment for the wider group shows we have the potential to stimulate another 7,150 jobs and €57m in economic impact for the Irish economy by 2021 but central to this is growth of passenger numbers. The more we grow, the better it is for the region.”