Two Irish attractions – Dublin’s Roe and Co Distillery and Tayto Park’s new driving school in Co Meath have been named among the world’s best new experiences for the coming year in Lonely Planet’s Best in Travel 2019.

The guide looks forward to the new year’s best travel destinations, trends, journeys and experiences to have in the year ahead. 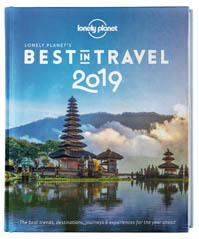 The guide book says of the Dublin distillery: “There’s no better indication that Irish whiskey is back in fashion than the fact that drinks giant Diageo, which owns Guinness, has got in on the act. Alongside the whiskey distillery, an exciting visitor centre is planned for next year…Get a taste of the action from April 2019”.

It says: “If life in the fast (or even slow) lane appeals to your children, they will love the chance to be proper drivers at Tayto Park’s new driving school. What children might not expect is that they take away their own ‘driving licence’ at the end of the day. There are lessons in how to drive and then a chance to take to the road with 20 other young drivers.”

Each year, the lists start with nominations from Lonely Planet’s community of editors, researchers and locals and influencers, and are then decided upon and ranked by a panel of judges.