Trending
You are at:Home»Aviation»The year of the French routes as Ryanair reaches deal with Stansted

Ryanair has announced a new deal with Stansted’s parent group to offer nine new routes from the London area airport.

The deal, agreed with Manchester Airports Group, sees a new daily service to Naples and a three times daily service to Copenhagen, as well as routes to Beziers, Cagliari, Clermont, Grenoble, Nice, Nimes and Strasbourg, plus extra flights on 13 existing routes

It’s the first big routes announcement this year by Ryanair, which had the highest number of new routes – 200 – announced by any airline, ahead of EasyJet’s 106. The breakdown is:

Ryanair’s Chief Commercial Officer, David O’Brien, said: “Having grown our London Stansted traffic from 13.2m in 2013 to over 20m this year, this new deal will allow Ryanair to continue to expand our route network at Stansted, our largest European base.” 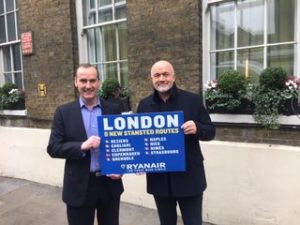 The Divisional CEO at London Stansted, Andrew Cowan, said: “Ryanair is an important and valued partner for us at Stansted and we’re delighted to support the airline’s exciting expansion plans for the summer, which will help ensure Stansted remains one of the UK’s fastest growing airports and see us serve well over 25 million passengers a year within the next 12 months.”