Trending
You are at:Home»Ireland inbound»Judith Owens takes the top jobs as Titanic Belfast looks to expand

Travel and events veteran Judith Owens is to succeed Tim Husbands as Chief Executive of Titanic Belfast. Mr Husbands recently left to become CEO of Westport House and Hotel Westport, which are controlled by the Hughes Group. 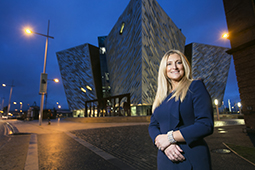 Judith Owens, currently Director of Operations and Deputy Chief Executive of Titanic Belfast, officially takes over on December 15. Titanic Belfast has welcomed almost 440,000 through its doors between April and August this year, up from 360,000 in 2016. The attraction has attracted more than four million people from over 145 countries since opening in 2012. Ms Owens has also run other successful events in the North, including the BBC Sports Personality of the Year Red Carpet event, MTV Sounds and BBC Proms in the Park.

She also worked on the the operation of SS Nomadic and the Titanic Exhibition Centre in 2015. Before joining Titanic Belfast, she was Head of Operations and House Manager at the Waterfront & Ulster Hall for 14 years.

Conal Harvey, Deputy Chairman of Titanic Belfast, said:  “We have ambitious plans to develop Titanic Belfast and its related activities so it continues to be recognised as a world leader in tourism and we know Judith’s experience will prove invaluable.”

Judith Owens said: “I’m very proud of Titanic Belfast and everything it has achieved in its first five years, resulting in it being crowned the World’s Leading Tourist Attraction at the prestigious World Travel Awards.”