Trending
You are at:Home»Aviation»18m passengers use Dublin Airport in first half of year as July breaks records 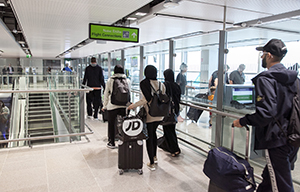