Trending
You are at:Home»Aviation»34 Irish tourism trade in Vegas for IMEX America 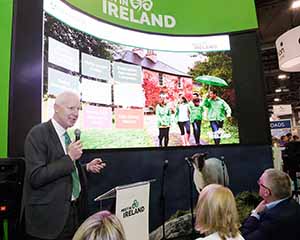 It says Q3 figures also show strong growth in locations outside of Dublin through Regional Convention Bureaux in Shannon, Cork, Kerry and Galway.  Failte uses multipliers to calculate that each delegate is worth €1,384 to the Irish economy, a total of €162m.

Fáilte Ireland’s Meet in Ireland team are in Las Vegas for the annual IMEX America event with 85 one-to-one meetings and 34 members of Irish trade joining Fáilte Ireland with an additional 470 appointments.

The trade partners include:

Speaking at IMEX America, Fáilte Ireland’s CEO Paul Kelly  said:
“tourism is a significant contributor to Ireland’s wellbeing, both socially and economically. It supports 240,000 jobs and also generates €7.2 billion in revenue and €1.7 billion in Exchequer earnings – the equivalent of over €1,000 for every household in Ireland. In the Business Tourism sector, we believe there’s huge potential for future growth and the business we’ve won so far this year, exceeding the total figure for 2017 already, is testament to that. I’m particularly excited about the potential of Business Tourism regionally. Conferences and business events are benefitting regions outside Dublin but they could play a much bigger part – and this will be a strategic focus of our work over the coming years and we’re hoping to convert even more business for the regions here at IMEX America this week. Thanks to Ireland’s amazing hospitality, ease of access, venues and leading industries, Ireland manages to punch well above its weight in winning business events and we have been seeking out every possible opportunity to bring even more big events to Irish shores. There are sound business reasons to do so – every delegate is worth more than €1,600 to the Irish economy and I’m delighted that, so far this year, we’ve secured €162m worth of business for future years, in both the capital and the regions, with much more in the pipeline. Events like IMEX are a key opportunity to get major overseas meetings, conferences and events booked in for the years ahead. We have top-class Irish industry joining us, and I have no doubt they will give these buyers countless reasons to book meetings in Ireland.”