Trending
You are at:Home»Aviation»Aer Lingus to feature on English TV show X Factor for second year bringing contestants to the US again

Aer Lingus has been revealed as official Airline Partner of The X Factor 2018 for the second year run in a deal which will showcase the airline on the London-based ITV talent show.

It’s the second time that Aer Lingus featured on the show. Last year contestants were visibly disappointed to end up in Dublin in the judges’ houses round. Their mood brightened when judge Louis Walsh told them it was just a stopover en route to San Francisco, flying business class. 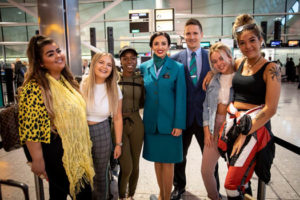 This year Aer Lingus flew the ‘Girls’, ‘Groups’ and ‘Overs’ to the judges’ houses from Heathrow Terminal 2 to LAX via Dublin.

Ruth Ranson, Aer Lingus Director of Communications, said: “Our dedicated cabin crew, flight crew and ground staff, who go above and beyond every day to ensure our guests experience the very best service , were instrumental to ensuring the success of this partnership.”

Filming for the show took place at Heathrow’s Terminal 2, and included contestants checking-in for their flights, inside the Aer Lingus business class lounge and on board in business class.

The first of judges’ house episode appeared on Virgin Media One at 8pm on Sunday, 7 October. The second and third judges’ houses episodes will be broadcast on Saturday, 13 October and Sunday 14 October.