Trending
You are at:Home»Aviation»Aer Lingus teams up with Girl Guides to encourage pilots of the future

Aer Lingus has teamed up with the Irish Girl Guides to create the ‘Aviation Badge’ to encourage girls to get interested in science and technology subjects in school and consider future careers in the aviation industry.

Ladybirds must colour in a picture of an aircraft and make an object that flies such as a paper plane or kite. Brownies will research different careers linked with aviation and air transportation, investigate innovative women in the history of aviation and learn the phonetic language of Aviation. 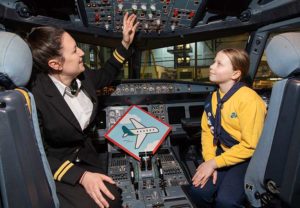 First Officer Rachel Passmore and Sarah Cassidy (9) (Brownie); at the announcement that Aer Lingus has partnered with the Irish Girl Guides

Guides must research the job of pilots, including what education and skills are required; test their engineering skills by creating aircraft experiments and challenge them to think of things that fly and how.

Aer Lingus was the first airline in Europe to employ a female pilot, and currently, Grainne Cronin back in 1977, and employs twice as many female pilots as the international airline industry average.

It is making an effort to encourage a greater number of women to apply for roles that have traditionally been male-dominated via their Aer Lingus Future Pilot Programme, the Aer Lingus Apprenticeship Scheme as well as opportunities in airline operations.

Brian Bowden, Chief People Officer for Aer Lingus, said: “We want to encourage girls to study STEM (science, technology, engineering and maths) subjects and consider aviation. Just over 5pc of airline pilots worldwide are female and only 16pc of engineering graduates in Ireland are female.”

Helen Concannon, Chief Commissioner for the Irish Girl Guides, said: “We love to encourage our girls to aim high and reduce stereotypes. Our programme develops their confidence and a self-belief that they can be anything they want to be. However, it is hard to be something you can’t see and this partnership enables us to show our members the variety of things they can be in the aviation industry.”