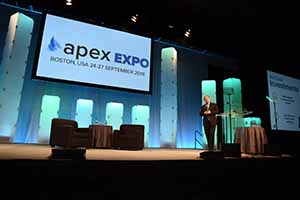 These changes are part of a brand refresh that will also include 12 new Airbus A321neo long-range aircraft, a redesigned livery and new cabin crew uniforms, Kavanagh said. And while the CEO said the changes will reflect “the airline’s modern outlook and ambition to be the leading value carrier across the North Atlantic,” the livery will retain its iconic shamrock and green hue.

Kavanagh said: “We are announcing today our intent to also offer a complimentary glass of wine or beer with the meal service  to our transatlantic Economy guests and to provide free social messaging with 20MB complimentary wifi for Smart Fare transatlantic economy guests. Extensive feedback from our guests has informed these decisions as we adapt our offer to our guests’ needs.  The airline plans to unveil a refreshed brand identity in January which will “reflect the airline’s modern outlook and ambition to be the leading value carrier across the North Atlantic,

Since joining IAG in 2015, Aer Lingus has launched eight new transatlantic routes, marking the largest ever transatlantic expansion in our history.  In the past three years alone, Aer Lingus has increased the number of destinations served from nine to fifteen and has also added capacity on a number of existing routes. The two new destinations will add a quarter of million additional seats annually to Aer Lingus’ transatlantic network which already carries 2.8m guests annually between Ireland and North America.”

Next year the airline will take delivery of the first of its new Airbus A321 neo long-range aircraft, which has new engine and aero-dynamic technology and delivers increased range, increased fuel efficiency and reduced noise.

“Our aircraft are designed for maximum guest comfort, whether in economy or business class and our staff are dedicated to ensuring every guest has a pleasant experience on board.  Among the extras we offer as standard on transatlantic flights are complimentary 23kg baggage allowance (Smart Fare), complimentary on-board meals, and 120 hours of the very best in-flight entertainment.”

These decisions, like all of the airline’s investments and de-investments, Kavanagh said, were influenced and directed by Net Promoter Score, with a goal to be in the 40 to 50 range across all areas of the business. NPS is used to determine which areas are relevant to passengers, but “we cannot be all things to all people,”

It is for this reason that the airline sometimes chooses to maintain the status quo or even refrain from fixing a problem if it wouldn’t translate into an improved NPS. It is those really critical areas where we have dissatisfied guests – what we call hotspots –  where we are capable of delivering high changes to NPS, and that is where we focus our business.

Changes to in-flight entertainment screens yielding a 16-point bump in NPS, and an extra $0.50 investment per headset resulting in a transformational improvement to the passenger experience. Guided by NPS, the airline is also boasting the highest margins among the IAG airline group, beating out British Airways, Vueling and Iberia.