Shannon Airport has offered to help more airports to provide facilities for adult and child passengers who have neurodevelopmental challenges such as autism.

Shannon, which opened Europe’s first sensory room in March 2017, said it has facilitated visits by airports around the world to follow its lead.  Among them was Gatwick Airport, which yesterday opened Britain’s first such room. 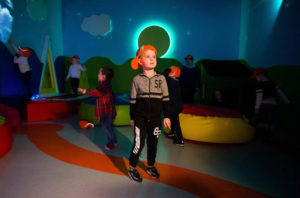 Ryan Cunningham (4), from Gaelscoil Donncha Rua, Shannon, in the sensory room when it opened in 2017. Photo: Diarmuid Greene / True Media

Matthew Thomas, CEO, Shannon Group plc, said: “We know from opening our own airport sensory room in March 2017 that the Gatwick sensory room will be a tremendous assistance to passengers with autism and special needs.

“We already have well-established Ryanair services between Shannon and Gatwick airports, and the new Gatwick Sensory room means that a trip between the two airports will be even more user-friendly.”

Andrew Murphy, Managing Director, Shannon Airport, added: “We realised that it was one thing for Shannon to put these provisions in place but if other airports participated in this programme, then it would mean that when the passenger arrive on the other side they also get special treatment. That would be a huge gift to people with special needs and their families.”

He added that “the response from the aviation community was astounding. Since establishing our sensory room we have received over 30 enquiries from airports, government agencies and sporting venues around the world.

“Our offer to assist other airports who might be thinking of following suit still stands.”