Trending
You are at:Home»Aviation»Anne Rigail is new CEO of Air France

Anne Rigail has been named the new CEO of Air France, following the appointment of Benjamin Smith as CEO of the Air France-KLM group.

Ms Rigail (49) was interviewed recently by Travel Extra in Paris at the launch of Air France’s new long haul economy and premium economy cabins. She explained at September’s launch, in her then role as EVP Customer, that service would include “French-style meal, accompanied by a selection of rigorously selected wines and champagnes”, even in Eeonomy.

She will assume her new role as CEO Air France on December 17, and will replace Benjamin Smith, who was appointed acting CEO of Air France through the end of 2018. 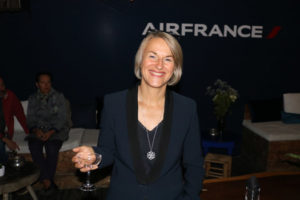 Anne-Marie Couderc, Chairwoman of the Air France-KLM Board of Directors, said: “I would like to thank Benjamin Smith for the outstanding work he has accomplished during his time as acting CEO Air France.

“Under his leadership, our airline has rapidly taken decisive steps, renewing constructive social dialogue, and proposing a new executive governance structure as seen with the arrival of Anne Rigail. I wish Anne every success in her new position, for the benefit of both Air France and the Air France-KLM Group. I am very pleased that she has accepted this very exciting new challenge.”

Benjamin Smith said of Ms Rigail: “Anne is a strong professional in the airline industry. Throughout her career, she has always paid particular attention to employees while implementing the many projects and transformations she has led, and placed the customer at the heart of everything she does.”

Ms Rigail said that  “with over 27 years of experience in the service of our Group, I will continue to dedicate all my energy and effort into ensuring the success of my colleagues and of Air France”.

See also  Emirates will be landing in Ireland this February with exciting career opportunities
The following two tabs change content below.