The Spa at Ashford Castle has been named Best Spa in Ireland at the 2018 Irish Tatler Spa of the Year Awards, the 10th year of the awards. It replaces Monart, 2017’s overall winner. 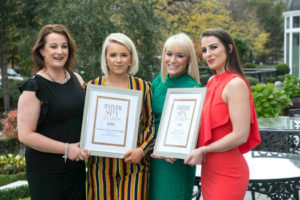 Fiona McDermott, Aliosia Mitchell, Michelle Ryan and Clare Mullaney Dignam from The Spa at Ashford Castle, overall winer of the Irish Tatler Spa of the Year Award at the InterContinental Hotel in Dublin. Photo: Paul Sherwood

The glamorous Spa at the five star Ashford Castle was named best in Connacht, as well as overall winner; Wexford’s destination spa Monart won in Leinster, the Samas Spa at the Park in Kenmare for Munster; while the Spa at Galgorm was named the Best Spa in Ulster for the second year in a row.

Among the other awards of the day were the country’s Best Facial, at Monart Destination Spa, the Best Body Treatment care of Kilkenny’s Lyrath Estate and a Best Service award that went to the Spa at Killarney’s Aghadoe Heights Hotel. Spa managers from some of Ireland’s most prestigious properties attended the ceremony at the Intercontinental Hotel in Ballsbridge.

Irish Tatler editor Shauna O’Halloran said “We have amazing luxury spas to offer in Ireland, and with hotel bookings and high end staycations being once again on the up, there is nothing but good news for the Irish spa industry,” said