Trending
You are at:Home»Aviation»Air France launches new airline Joon to appeal to millennials

Air France mainline will disappear from the Paris to Barcelona, Lisbon, Porto and Berlin routes as it adds a new airline to its family, Joon.

Joon will join Air France itself, low-cost carrier Transavia and regional French carrier Hop! in the group, and Air France CEO Franck Terner said Joon will be “a little sister” to the flagship carrier and complete a full offering of airlines from the group.

Joon – nine months in the making – has already been dubbed an airline for Millennials, and the most striking change is the cabin crew uniform – sleeveless tops, runners, casual jackets and polo shirts. 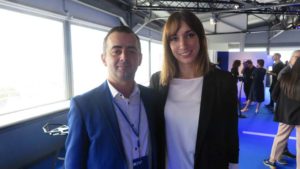 Yunus Buran, Senior Group Press Officer, France and International, at Air France and KLM, and Ciara MacHugh, Communications Manager for Britain and Ireland, at the launch in Paris

Youth-focused craft beers, freetrade coffee and organic foods from French artisan companies will be available onboard. It will also offer

It’s also partnering with parking agency Travelcar, where passengers can allow their cars to be rented while they’re abroad, as well as Airbnb to offer rooms and “experiences” to Joon passengers. The airline will also have an entertainment hub, YouJoon, with inflight streaming of shows like Game of Thrones, and web TV with Red Bull TV, YouTube and others. Each seat will have its own USB port.

While not positioned as a low-cost carrier, Terner said fares will be competitive, starting at €39 one-way between Barcelona and Paris. He said the aim of the airline is to feed passengers to its Charles De Gaulle hub. A cabin bag and extra bag for laptops will be free of charge – but the message is “travel light, travel cheaper”.

But Joon will also have offer limited long-haul services, to Fortazela in Brazil, from €249 one-way, and to Mahé in the Seychelles (from €299 one-way).

It will offer 51 weekly flights between CDG and Barcelona; 37 with Berlin; 28 with Lisbon; and three with Porto. On the long-haul side it’s 2w to Brazil and 3w to the Seychelles.

Travel Extra attended the launch event in Paris’s Montmartre district, where Joon CEO Jean Michel Mathieu said Joon would be under the protective umbrella of Air France – “pricing, ground maintenance, pilots and so on are all through Air France”, he said.

“Joon will be operated with lower costs than Air France, making it possible to open or reopen routes against aggressive competitors,” he said. “The main objective is to contribute to feeding Charles De Gaulle”. The airline is leasing its aircraft from its parent company but giving them a makeover, with distinct livery and all-leather seats with a fleet of 18 short-haul aircraft (Airbus A320) and 10 for long haul. The longer routes will be operated with Airbus A340 aircraft, and Joon will be getting A350s next year – equipped with wifi – as well.

Air France CEO Franck Terner said “we’re not a cheap low-cost long-haul operator and will offer at least one free meal on those services.” Short haul passengers in economy will get complimentary orange juice and water.

Jean Michel Mathieu told Travel Extra that while the US is not on the radar at the moment, Joon is looking to expand, and Dublin would remain a consideration. Joon is finalising the details of air transport certificate and will begin short-haul services on December 1, with long haul next spring.

Travel Extra’s images from the event are here.