Bray Air Display, which was recently awarded the title of best large festival/event at the Irish Tourism Industry Awards, is to return this year, it has been confirmed.

The air show, supported by the Irish Aviation Authority, will take place on July 22 and 23. This will be the 12th year of the event, which attracted 140,000 people to the Co Wicklow seaside town last year.

The shows organiser claim the air show contributes €3.5m  to the local economy, attracting visitors from  across Ireland and Europe. The event was recognised this year as ‘Best Festival / Event Experience (large)’ at the prestigious, national Irish Tourism Industry Awards 2017. Bray Air Display was one of just 14 winning tourism experiences selected from 250 entries. 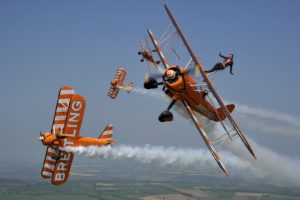 Se Pardy, Director, Bray Air Display, said: “We are delighted to confirm the dates for this summer’s air show. We enjoyed an extra-special event last year celebrating 100 years of aviation in Ireland which attracted a record-breaking number of spectators to view the best of the best perform in the skies over Bray. It is fantastic that the event’s success was recognised at the recent Irish Tourism awards – we’re looking forward to another wonderful event this year and will be announcing the line up over the coming months. Keep an eye on brayairdisplay.com and social media for updates.”

The main supporters of the Bray Air Display are the Irish Aviation Authority (IAA) as part of its #AviationIreland campaign to promote aviation across the State.  The IAA also supports the Foynes Air Show which will take place on Saturday, July 22, in Co Limerick.

Eamonn Brennan, Chief Executive of the Irish Aviation Authority said: “The Bray Display has been a phenomenal success over the last couple of years. Aviation is a hugely important economic driver for our country and this year under the IAA’s “Aviation Ireland” campaign we are supporting not just one but two spectacular air shows over the same weekend at Foynes and at Bray, making this year an extra special one for fans of aviation across Ireland. We see this as a great avenue to raise the profile of aviation and to generate an interest in our industry.”

#BrayAirDisplay is also supported by Wicklow County Council and Bray.ie and is renowned as one of Europe’s best air displays.  Visit www.brayairdisplay.com and follow on Facebook and Twitter  for more event updates.