Trending
You are at:Home»Afloat»Belfast travel veteran to replace Wilkinson as MD of NCL for Irish market

Norwegian Cruise Line has appointed Irishman Eamonn Ferrin to head up its operations in the key Irish and British markets Eamonn Ferrin as UK and Ireland managing director.

Mr Ferrin, educated at St Mary’s Grammar and Queen’s University in Belfast, will take up the role of Vice-President and Managing Director for NCL’s markets in Israel, South Africa and the Middle East markets, as well as Ireland and Britain. He will report directly to Norwegian Cruise Line Holdings’ President Harry Sommer.

Nick Wilkinson, who was previously VP and MD for Britain, Ireland, Middle East and Africa, will report to Mr Ferrin in a newly-created role of regional Vice-President of business development.

It’s the latest management reshuffle at NCL – in September 2017, Nick Wilkinson was appointed VP and Managing Director for Britain and Ireland. At that time, Francis Riley, Senior Vice President of international sales, marketing and operations, left the company.

Eamonn Ferrin has previously held a range of senior industry roles in the airline, tour operator, cruise and hotel sectors, and most recently worked as an industry consultant. 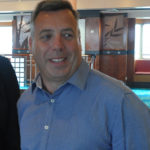 Mr Sommer said: “Eamonn’s appointment comes at an exciting time in our company’s history as we continue to strengthen our global footprint.”

He re-emphasised that Britain and Ireland are its “second largest source market globally, and Israel, South Africa and the Middle East are emerging markets that demonstrate enormous growth potential.” Sunway is the official partner of the cruise line in Ireland.

“Eamonn brings more than 20 years of senior-level experience in the travel and hospitality industry, and having him lead our operations in some of our most important international markets is a testament to our global growth strategy.”