The Irish team have been crowned champions in the inaugural Stena Line Media Masters in Co Wicklow.

The two-day event, created to promote Stena ferry travel to golfers, saw a team of eight media from Ireland take on their counterparts from Britain at Druids Glen and Powerscourt golf clubs. 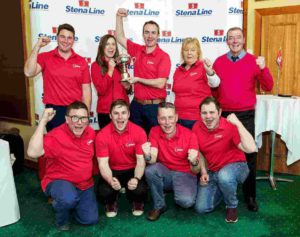 After a hard-earned 3-1 lead for Team Ireland in the opening day’s fourballs at Druids Glen, the home side won six of the following day’s singles matches at Powerscourt to run out 9-3 winners.

Team Ireland Captain Dermot Synnott from Destination Golf said: “I’m honoured to captain this Irish team to what was a resounding victory in the end. Thanks to Stena Line for creating this wonderful event and for an amazing two days on two stunning courses. Now that we have our hands on the trophy, we really don’t want to give it up and we’re already looking forward to defending it again next year.”

Diane Poole, Stena Line Travel Commercial Manager, Irish Sea South, said: “Congratulations to Team Ireland on a thoroughly well-deserved victory in our first Stena Line Media Masters competition. Across Britain and Ireland we have some of the finest golf courses in the world… and one of the best ways for golfers on both sides of the Irish Sea to explore them is to travel with their friends, family – and clubs – by ferry with Stena Line.”