Trending
You are at:Home»Aviation»Double win for Irish as Dublin Airport and Willie Walsh honoured at London awards

IAG‘s Dublin-born boss Willie Walsh has been honoured with a CAPA Legend Award at an aviation summit in London. And it was a double win for the Irish, with Dublin Airport named Medium Airport of the Year.

The awards were announced at the Sofitel at Heathrow Airport after a day of summit talks by aviation and travel executives. CAPA – the Centre for Aviation – partnered with the Association of Corporate Travel Executives (ACTE), to bring together CAPA’s Global Aviation Summit and ACTE’s Global Corporate Travel Conference for the second time ever. 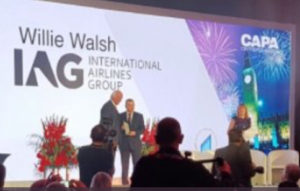 Honouring Walsh, former CEO of both Aer Lingus and British Airways, CAPA said: “Willie’s focused and strategic management style has served him well at the helm of Aer Lingus, British Airways and IAG, of which he was the lead architect. In both 2015 and 2016, IAG achieved a return on invested capital above its estimated cost of capital, giving it the rare distinction among European legacy airline groups of creating economic value for investors.”

It added: “Like other airlines, its 2016 results were helped by lower fuel prices, but IAG’s strong improvement owes much to Willie Walsh’s determination to stick to his goals, particularly as regards the turnaround of Iberia.”

The aviation body said that “IAG was the first among the larger European legacy groups to tackle labour cost restructuring. In addition, its 2013 acquisition of Vueling gave it a strategic advantage over Air France-KLM and Lufthansa in dealing with the short/medium haul threat from low-cost carriers.

“On long haul, it has eschewed anti-Gulf airline rhetoric with its Qatar Airways partnership, including codeshare, a joint venture with BA and an equity stake. On the North Atlantic, it is now benefiting from its acquisition of Aer Lingus and its long haul business has also seen the more recent launch of long haul low cost brand LEVEL.”

In the hotly-contested airports category, seeking the “biggest standouts strategically”, Dublin was named Medium Airport of the Year. “Dublin Airport has become a premier level hub now, one of the fastest growing in Europe, and is competing directly with the major hubs across the continent,” CAPA said. 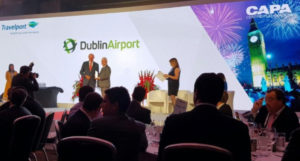 “A broad range of short and long haul full service and low-cost flights are available both to local passengers and those transiting it. It has integrated its US immigration pre-clearance facility successfully and is working towards the implementation of a second runway and associated infrastructure works which will ensure its future prospects.”

The overall Airport of the Year prize went to Amsterdam Schiphol, with the judges saying it “continues to demonstrate how a relatively small country can provide a world-beating hub airport, handling over 60m passengers each year, almost all of them travelling internationally. One of few airports of this size still to employ a single-terminal concept, in conjunction with the six runways it has managed to stay ahead of the growth curve by providing for the increase in low cost passengers.”

Airline-wise, Norwegian was named Airline of the Year, and the judges said: “Imitation is apparently the best form of flattery and that is clear with the increasing number of airlines now looking to adopt its model of using single-aisle aircraft to link transatlantic markets. Through its initiatives, Norwegian has blazed a trail that others are now following.”