Trending
You are at:Home»Ireland inbound»Minister Charlie Flanagan lines out in Tokyo to promote Ireland’s bid to host 2023 Rugby World Cup 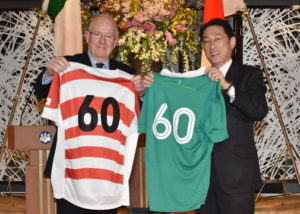 The rugby jerseys had the number 60 on their backs to highlight 60 years of diplomatic relations between the two countries. The Irish Rugby Football Union believes that 445,000 supporters would travel to Ireland for the tournament, requiring 2.67m bed nights. Proposed stadiums for the tournament are spread across the island. They are Dublin’s Croke Park, Lansdowne Road and RDS Arena; Nowlan Park in Kilkenny; Pairc Ui Chaoimh, Cork; Fitzgerald Stadium, Kerry; Limerick’s Thomond Park; Pearse Stadium in Galway; MacHale Park in Mayo; Celtic Park in Derry; and Belfast’s Kingspan Stadium and Casement Park.

The Minister said: “Minister Kishida and I discussed the opportunities to deepen Ireland and Japan’s trade relationship. Brexit was high on our agenda and I assured Minister Kishida that Ireland remains committed to the EU providing an attractive location to Japanese investors. I outlined Ireland’s preparations for Brexit.”

Flanagan also met the Japan-Ireland Parliamentary Friendship League which is chaired by the Japanese Minister for Agriculture, Mr Yuuji Yamamoto, and the founder of Support our Kids, a charity supported by Ireland that assists children affected by the earthquake which struck Japan  in March 2011, killing 18,000 people.