Trending
You are at:Home»Afloat»Former US Navy ship starts service for Irish Ferries on Dublin-Holyhead route

Irish Ferries’ new fast craft, Dublin Swift, has made its maiden sailing on the Dublin-Holyhead route. The new vessel is larger and more modern than the ship it replaces, Jonathan Swift, which has been in service since  1999.
Dublin Swift will operate at a cruising speed of 35 knots to the same frequency of twice daily return sailings as the vessel it is replacing. However, it’s got more capacity for cars (220) and passengers (820) and has a completely redesigned interior and a significantly upgraded level of passenger accommodation. 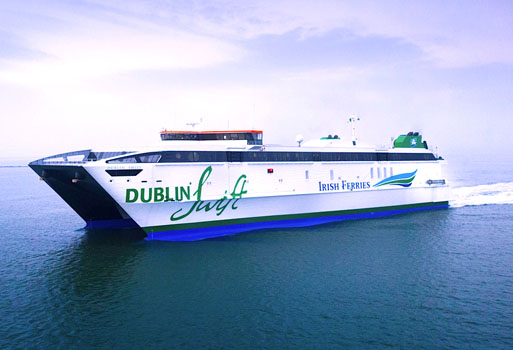 Onboard facilities include a dedicated TV Snug, cafeteria, self-service restaurant and games area. Passengers can choose normal seating or pay extra for reclining seats with views to sea, in-seat recharging points and complementary refreshments in the Club Class Lounge at the front of the ship. Free wifi is offered throughout.
In March 2011, Dublin Swift, then known as Westpac Express, was deployed as part of the US Navy response to the devasting Japanese earthquake and tsunami. Following the mercy mission, the ship’s crew were presented with United States Merchant Marine Medals for Outstanding Achievement at a ceremony on board the ship in Yokohama.
The following two tabs change content below.