Dublin Chamber of Commerce claims that reports that the Government is looking to speed up the construction of the on-off Metro North rail link to the capital’s airport could provide a Brexit boost to Ireland.

The Minister for Public Expenditure, former Tourist Minister Paschal Donohoe, is reported to be looking to bring forward the construction of the project by two years as part of the revised Capital Plan.

The Chamber said that the line, which will run from the city centre to Dublin Airport and greatly improve access to the city for foreign tourists, is urgently needed to address ever-worsening congestion in Dublin.

Chamber CEO Mary Rose Burke said: “Speeding up the construction of Metro North would send a clear signal to the people and businesses of Dublin – and also workers and companies looking to locate here in light of Brexit – that Ireland is serious about addressing the current infrastructure deficits that threaten to stifle growth. The lack of a rail link between the city and the Airport is proving a deterrant to companies moving jobs and business to Ireland.” 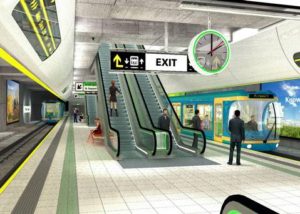 Dublin Chamber has called for the revised Capital Plan to also include dates for the start and finish of the construction of Dart Underground.

The Chamber pointed to successive global indices – including the recent World Economic Forum report – which have highlighted the lack of infrastructure investment as a threat to Ireland’s competitiveness.

Ms Burke said: “Metro North and Dart Underground have the potential to transform public transport in Dublin. Together, they can provide the cornerstone of a public transport network that will set Dublin up for the next 100-plus years.

“The Transport Minister’s commitment to making both projects happen is very welcome and must now be supported by a commitment by Government and the transport authroties to secure the required funding to deliver Metro North and Dart Underground much quicker than previously intimated.”