Trending
You are at:Home»Ireland inbound»Ireland hopes force is with it as it aims to grab slice of €3.4bn trade at WTM

Tourism Ireland is using the force of Star Wars to get its message across as this year’s World Travel Market as it competes with 182 other countries and regions for business.

Junior Tourism Minister Brendan Griffin TD joined Tourism Ireland and some 70 tourism businesses from across the island on the opening day of WTM in London, heralding the beginning of Ireland’s promotional drive overseas for the 2018 season. Ireland is pushing its Star Wars connections, with many scenes from the latest movies shot in the Skelligss off the Kerry coast. 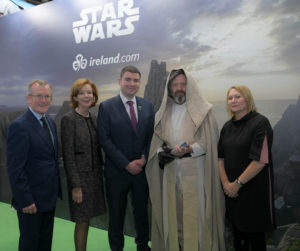 Over the next three days, the Irish companies will engage in thousands of meetings with British and international tour operator for business in 2018. Organisers estimate that almost £3bn (about €3.4bn) worth of business was done at last year’s WTM.

“The level of representation from Irish tourism enterprises is very encouraging but at the same time the event demonstrates the level of competition in the marketplace and underlines the need for our sector to maintain its competitiveness,” said Minister Griffin.

“The industry representation here from Ireland knows that, while we have experienced a couple of great years in tourism, the sector is constantly evolving. Brexit is an example of this. It has resulted in a decline in visitors from the UK and this is something that both Tourism Ireland and Fáilte Ireland are taking steps to address. However, it can also help the industry explore and develop opportunities in other markets which might not have been considered previously.”

Niall Gibbons, CEO of Tourism Ireland, said of the British market: “In 2018, we will continue to work with our industry partners to highlight the ease of getting to the island of Ireland, with almost 227,000 seats by air and 44,000 car spaces on ferries from Britain every week, as well as the wide variety of things to see and do on holiday here. Competitiveness and the value for money message will remain important. We are committed to making 2018 another strong year for Irish tourism.”