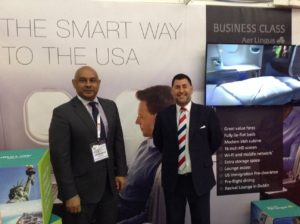 Irish interests were represented, with Aer Lingus represented by Head of Corporate Sales Alan Molloy, Keith Tenn, Business Development Manager in Britain, and Business Development Executive Graham Forrest as the team showed off the airline’s Business Class offering to the United States while Norwegian Air International was unveiling its US plans across the water in Cork.

Ireland’s biggest hotel group – Dalata – was represented by marketers Madeleine Greenhalgh of the Clayton Hotel Manchester Airport and Holly Shackleton, Clayton Hotel Leeds, as they highlighted both the Clayton and Maldron brands in the Hotel Village at the show.

Clayton Hotels now has a 1.3pc share of the British market, and highlighted upcoming openings at the show which included Dublin’s Charlemont Hotel (2018), plus new Maldrons in Newcastle in England, plus Dublin and Belfast next year. 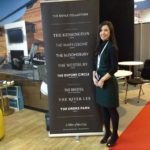 The Doyle Collection stand at the show 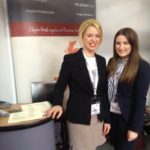